“A very active, change-making jazz composer and educator, with lots of high-profile commissions under her belt and influential activities across the board”  BBC Radio 4’s Women in Music Power List 2018

Many of her commissions have received funding from Arts Council England, PRS-Foundation & Youth Music

Issie’s also a very proactive board director of the British Academy of Songwriters, Composers and Authors (where she’s also the chair of the Jazz Committee) and a Trustee of Jazz Heritage Wales

2011 shortlisted for the prestigious Paul Hamlyn Awards for Artists 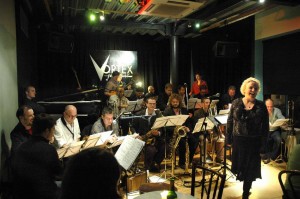 ISSIE CURRENTLY DIRECTS THREE OF HER OWN PROJECTS 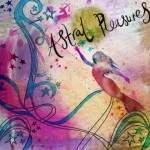 “If you read the notes and listen carefully, you really can picture scenes or follow a storyline.”  Dave Gelly, The Observer. Dave Gelly

“A very special band playing very special music –  often taking us from familiar jazz styles and asking us to explore different musical language with much beautiful programmatic orchestration” Anders Bergcrantz
Anders Bergcrantz
With each track comes a new story: From a day in the life of a super heroine, to an exquisite Chagallian summer’s eve, or a memorable afternoon’s walk through a momentous “Dublin Soundscape.” Dublin Soundscape 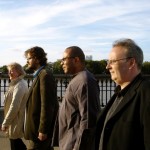 Issie also performs with, and writes for, her  Meinrad Iten Quartet with Rowland Sutherland on flutes, Mick Foster  on clarinets, Mark Donlon on piano and Issie on Baritone Sax with guest appearances from Carl Rütti in June 2007 and Kuljit Bhamra in August 2010. 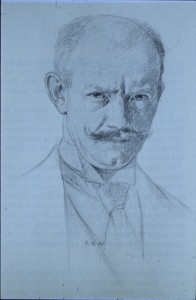 “Meinrad Iten (1867 – 1932 Unterägeri, Canton Zug) is my maternal great-grandfather – A prolific Swiss portrait and landscape artist who painted over 2000 paintings. In 2006 I received a box set of 4 DVDS containing photographs of Meinrad’s 2000 paintings and a commission from the Swiss Gemeinderat and Burgerkanzlei of Unterägeri to compose a suite, setting some of the pictures to music – for which I chose 11. Wilhelmine – Meinrad’s pencil portrait of Wilhermene his wife The Man With The Gun He Tangos – It’s as if the man’s doing a strange backward tango, with a gun for his dance partner! Snow Scene – ice-cold harmonies with the cool breathy sounds of wind through the snow. Das Mädchen – Reminiscent of the playful woodland dances my mother taught me as a child. Unser Vater – a friendly portrait of an Archbishop who was known to Meinrad, with a pencil drawing of Adolf Menzel (Meinrad’s most favourite artist) on the wall behind. Meinrad – A self-portrait with the austere expression we all seem to have inherited (somethings are definitely genetic!). Der Onkel – Meinrad’s maternal unclewho raised him as a child. Der Soldat – staring into the distance, as if haunted by memories. Der Weg – A processional dance with Ägeri’s woodland spirits. St Jost– the home of a catholic hermit who encouraged Meinrad’s study of art and where Meinrad and Wilhermine were later married. Der Tal: Wir Bleiben Zusammen – While Meinrad was dying he told his wife and three children to always stay together. When I walk through this part of Ägerital I feel the family’s presence (past and present) and the echoes of his wishes” 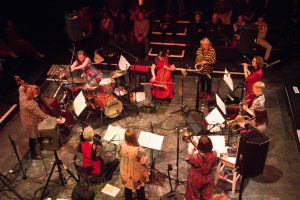 Issie’s newest project INTERCHANGE (In-to-change) started work in May 2017: An exiting & diverse new initiative, INTERCHANGE champions the music of the nation’s most innovative female jazz composers & improvisers, through an annually rotating, ever expanding, pool of performers & composers – Pushing at the boundaries & blurring all the edges!

“I’ve been wanting to work with these amazing musicians for years – avidly listening as they each forge uniquely diverse and vibrantly creative pathways across the international scene, collectively sharing a mutual keenness to be bold and adventurous with their ideas. I’m certain this hand-picked ensemble will provide the listener with a unique and exciting programme that offers a broader more diverse experience than any audience might typically hear!”

“A compelling & emotional set of top drawer contemporary jazz. Diverse in interests & histories … electrifying texture…the band played their heart out”
London Jazz News
“A totally engaging performance”
Jazz Journal
“….full of sophisticated music &improvisational skill”
Bebop Spoken Here
“One of the finest & most creative jazz groups I’ve heard for a long time. A wonderful group spirit .. an enormous range of rich & colourful sound… solo after solo was enhanced by the brilliant ensemble work. When their CD is out & the band fully launched on the international circuit this could be one of the sensations of the year”
Darlington & Stockton Times
“One for the wish list”
London Jazz News 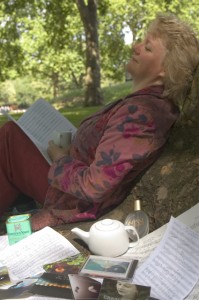 Never afraid to visit the full breadth of the psychological spectrum, Issie’s music invariably combines the warmth of an embrace with the full zest of a lemon!
.
“A great, great composer, who writes beautiful, beautiful music.” Julian Joseph: Pianist, Composer and broadcaster
“A proper, grown-up jazz composer, like Maria Schneider, Gary McFarland or Mike Gibbs.” The Guardian
“Well-regarded by many as being a gifted leader, composer and arranger of large ensembles.” Jazzwise
“A remarkable composer, conductor, arranger and baritone sax player.” Mo-Jo Magazine
“Without doubt one of the most outstanding writers in the jazz field and beyond.” Bebop Spoke Here
“Such beautiful music.” Steve Swallow – Bass player and composer
“The orchestration is simply breathtaking and the soloists fill out the picture beautifully.” The Observer
“Her amazing breadth of skills – composing, conducting, rehearsing and teaching – are JUST what the music world needs” Mike Gibbs
COMPOSER / ARRANGER
“Highly original writing, not lending itself to helpful comparisons.” Jazz Uk
“ Barratt has complete mastery of the orchestra, and hits all her targets.” The Guardian
“You might find the odd echo of Gibbs, the large-scale arrangements of Bob Moses or Jaco Pastorius, hints of the later Gil Evans and Mingus, but these compositions are like nothing else.” Jazz Uk
“Her formidable reputation as a jazz writer.” Mo-Jo Magazine
“A hand-picked ensemble”  The Observer
… stuffed with strong soloists.” Jazz UK
“The distinctiveness of Barratt as a composer… the empathy of this ensemble for her work.” All about jazz
“It’s contemporary big band jazz that refuses to lie still and behave itself and that’s to be encouraged.” Jazzwise Magazine
“It richly rewards repeated exposure.” Vortex website
“Its GREAT music” Mark Lockheart: UK saxophonist and composer
“Distinctive and memorable” Leicester Mercury
“I LOVE her writing”  Joe Locke US Vibes player and composer
“ It’s powerful stuff.” The Independent

“In recent years Issie’s emergence has been a most rewarding and innovative arrival – exciting, vitalizing and so noticeably effective. Her contributions have been on so many fronts“ Mike Gibbs 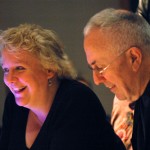 “A highly skilled and very sophisticated composer, whose music is appreciated and respected among musicians, composers and listeners alike. She has certainly found her own personal voice – which is beautifully unique and highly developed”  Anders Bergcrantz

“An important UK Jazz composer, arranger and orchestrator who has that rare ability of writing large scale music that successfully bridges the gap between jazz and classical composition. Her writing is unique in many respects, not 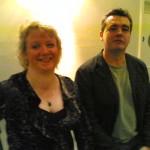 least for the sound world she creates by combining 20th century composition and orchestration with jazz and improvisation: Something that hardly anyone else is doing!”  Mark Lockheart 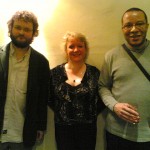 “An extremely dedicated and prolific composer, whose originality comes from a fluent working knowledge of jazz together with contemporary classical styles.  Her points of reference are broad and varied, her music disciplined and pays a great deal of attention to technique, whilst being broadly programmatic and always “tells a story”. Issie’s voice is an important one within the context of composition, both in terms of jazz and contemporary approaches” Mick Foster

“Issie has a very colourful and distinctive style. Her ability to combine both contemporary jazz and classical forms seems effortless and impressive, while her story telling through her music is vivid, inventive and highly expressive. Her “Meinrad Iten Suite” is like a set of miniature tone poems, often reminiscent of the music for wind by Weber, Richard Strauss and works by Dvorak while her  compositions for big band are on a par with many of the major British symphonic composers of the twenty-first century” Rowland Sutherland 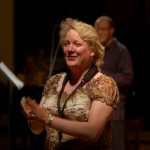 Issie is an extremely passionate and dedicated educator , setting up the highly successful Jazz Faculty at TrinityLaban in 1999, which she headed until 2004, when she became a Jazz Fellow, allowing her more time for her compositional and performance activities. A much sought after composition teacher, Issie continues to teach composition to undergraduate and post graduate conservatoire students, with her students regularly wining awards and prizes, such as the Dankworth Award in 2009, 2010 and 2011, BASCA’s new British Composer Award for jazz composition in 2010, All Party Parliamentary Jazz Awards and JazzFM awards with one being nominated for a Mercury Award in 2016 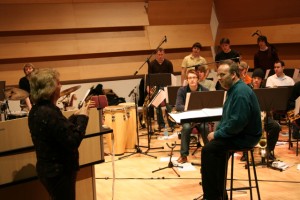 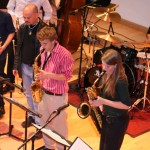 Before NYJC grew to include regional as well as national projects (demanding more of Issie’s time) she also adjudicated for Yamaha’s Jazz Experience, Watermill Jazz Young Composers Award and the Barbican/Lincoln Center Essentially Ellington as well as being an advisor on the Educational Advisory Panel of the now defunct Jazz Services 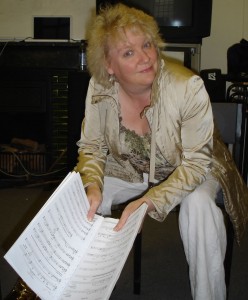 “The history of women Jazz Musicians in the UK” with co-writers Dr Catherine Parsonage and Dr Kathy Dyson commissioned by the Fondazione Adkins Chiti: Donne in Musica.

“The talented and gifted young Jazz Musicians of the C21st: Identifying their needs, assessing their access to national and regional opportunities and recognising the deficits on a regional and national scale”. Youth Music Feb 2006